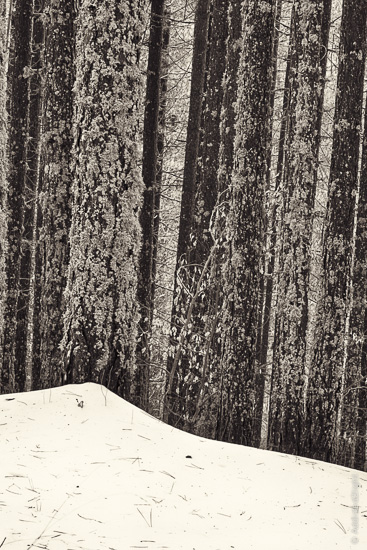 The technology doesn’t walk, it runs! Think: faster processors, more megapixels, better control software, and all of this at a cheaper price too.

A larger sensor will be always better than a smaller one OF THE SAME GENERATION, even if they both have the same amount of pixels. Larger photosites (this number is often referred as “pixel pitch”) will give you cleaner images compared to smaller ones. It’s like trying to collect rain: obviously you will get more water the bigger the buckets you use are; the same goes with light and photons. And the difference will not be noticeable only at high Iso, even if the higher you crank the sensibility the more dramatic it will shows.

3) Three is the magic number

I stressed in the point before “of the same generation”. Every 3 years or so the improvements in technology let you obtain the same quality you used to get with a large sensor of the previous generation with a smaller, “younger” one. Obviously the big sensors of the same generation will be still better than the small one – see previous rule – but at some point the quality you are getting is high enough that image quality alone stops to be a worry, and other things like portability or weight comes into the equation.

A 2-time increase in megapixels let you notice with ease the differences even in prints of the same size – and not only pixel-peeping. With this I mean that it will spot the difference not only the trained eye of a professional, but the layperson’s too.

5) Decide how big do you want to print

Given the amount of megapixels that are packed into the latest cameras it starts make sense to reverse the question. Not: how many pixels has the camera? But: how many megapixels do I need? This basically depends on how big you wanna print: so decide this first, and keep in mind that for the odd large print, at least with subjects like landscapes and architecture, you can alway combine various shots to increase the resolution your camera is capable of.

See my previous post: How many megapixels do you need

The images just captured go from the sensor to a pre-processing chip (for example the Canon Digic or the Sony Bionz); this before being saved as raw files. How this chip handles them makes a lot of difference, even if you compare two cameras with the same sensor but different chips.

In a rapid market like the photographic one products get often released when there are still a few, yet undiscovered, faults. So before making a definitive judgment on a camera be sure that the firmware – the little control software that makes the camera work – is not at its first iteration. Think, for example, what happened with the Fuji X100: almost awful when it hit the shelves with its first firmware, it got better and better with each update and now it is a terrific camera.

Raw files are a bit like a musical score; the song – the image – is in there, but the interpretations can vary a great deal. Choice wisely, and test the files from a new camera with various raw converters before judging its quality.

You can see how much this matters here: The importance of choosing the right raw converter

AA filters are expressly designed to rob sharpness, so not a big surprise. But also the infrared reduction layer put on top of the sensor can wreak havoc with your lenses, especially if they are wide-angles. This, supposedly, because of the thickness and the refractive qualities of this additional layer of glass. There is some evidence, for example, that once you remove the IR glass from a problematic – with wide angles – camera like the Sony A7r the corner smearing goes away. And this is probably why a prehistoric – in “computer-years” – camera like the Leica M8 can still deliver pretty great results, thanks to its ultra-thin IR filter.

Cameras are now basically computers with lenses, and unless you got paid handsomely for your work is better to trait them just like ones. That means don’t go after the last novelty; buy instead a camera presented in the past year. It will not be cutting edge, but it will still be exceptionally fast and good. As an added bonus, it will be way more probable that the manufacturer will have released, in the meantime, a few firmware fixes to iron out all the problems found by the early adopters – see point 7.