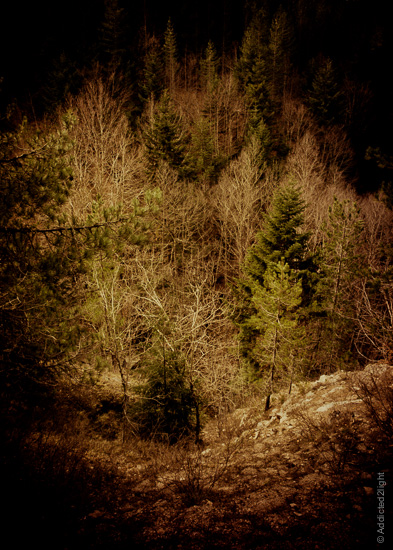 During the years I stumbled on a few quotes from various (often great) photographers, writers and painters that I thought revealed one or more facets of this beautiful art. I decided to share them with you because they can teach us more than a thousand page manual could what the essence of photography is. Enjoy your reading!

“You don’t take a photograph, you make it.”

“The single most important component of a camera is the twelve inches behind it!”

“There is nothing worse than a sharp image of a fuzzy concept.”

“Twelve significant photographs in any one year is a good crop.”

“You don’t make a photograph just with a camera. You bring to the act of photography all the pictures you have seen, the books you have read, the music you have heard, the people you have loved.”

“No place is boring, if you’ve had a good night’s sleep and have a pocket full of unexposed film.”

“What’s really important is to simplify. The work of most photographers would be improved immensely if they could do one thing: get rid of the extraneous. If you strive for simplicity, you are more likely to reach the viewer.”

“I really believe there are things nobody would see if I didn’t photograph them.”

“A photograph is a secret about a secret. The more it tells you the less you know.”

“I never have taken a picture I’ve intended. They’re always better or worse.”

“Be daring, be different, be impractical, be anything that will assert integrity of purpose and imaginative vision against the play-it-safers, the creatures of the commonplace, the slaves of the ordinary.”

“So, what do you photograph?”
I swallow my wine.
“What?”
“You know – city scapes, nature, portraits, candid shots…”
Boobs. I photograph boobs.
“Uhh… people?”

“To me photography must suggest, not insist or explain.”

“Would you hang it on your wall? Then it’s a good photograph.”

“If your pictures aren’t good enough, you aren’t close enough.”

“Sharpness is a bourgeois concept”

“If I knew how to take a good photograph, I’d do it every time.”

“A tiny piece of glass slowing, bending, organizing light – light – into your grandmother, the Grand Canyon, the begonia on the windowsill, the film keeping the image like a secret. Grandmother, canyon, begonia tucked neatly into the sleek black box, like bugs in a jar. My mind boggled.”

“To me, photography is an art of observation. It’s about finding something interesting in an ordinary place… I’ve found it has little to do with the things you see and everything to do with the way you see them.”

“I used to think that I could never lose anyone if I photographed them enough. In fact, my pictures show me how much I’ve lost.”

“Beauty can be seen in all things, seeing and composing the beauty is what separates the snapshot from the photograph.”

“It’s weird that photographers spend years or even a whole lifetime, trying to capture moments that added together, don’t even amount to a couple of hours.”

“The more pictures you see, the better you are as a photographer.”

“Photography for me is not looking, it’s feeling. If you can’t feel what you’re looking at, then you’re never going to get others to feel anything when they look at your pictures.”

“Don’t pack up your camera until you’ve left the location.”

“Actually, it’s nature itself that creates the most beautiful pictures, I’m only choosing the perspective.”

“With photography, I like to create a fiction out of reality.”

“Of course, there will always be those who look only at technique, who ask ‘how’, while others of a more curious nature will ask ‘why’. Personally, I have always preferred inspiration to information.”

“A photographer is like a cod, which produces a million eggs in order that one may reach maturity.”

“Photography is a way of feeling, of touching, of loving. What you have caught on film is captured forever…it remembers little things, long after you have forgotten everything.”

“All photographs are memento mori.”

“The painter constructs, the photographer discloses.”

“When we are afraid, we shoot. But when we are nostalgic, we take pictures.”

“It’s not what you look at that matters, it’s what you see.”

“The camera basically is a license to explore.”

“Only photograph what you love.”

“When you approach something to photograph it, first be still with yourself until the object of your attention affirms your presence. Then don’t leave until you have captured its essence.”