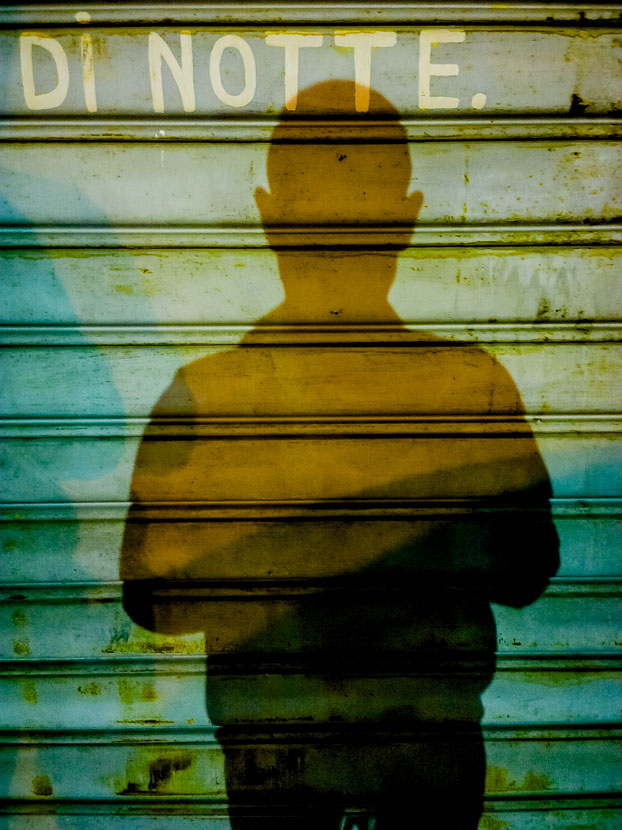 Following a few rules simplify your life, generally. But knowing when you have to break them is what makes the difference between a technically competent photographer and a proficient one.

The return you get in following the rules is distributed, like many other things, along a Bell curve. 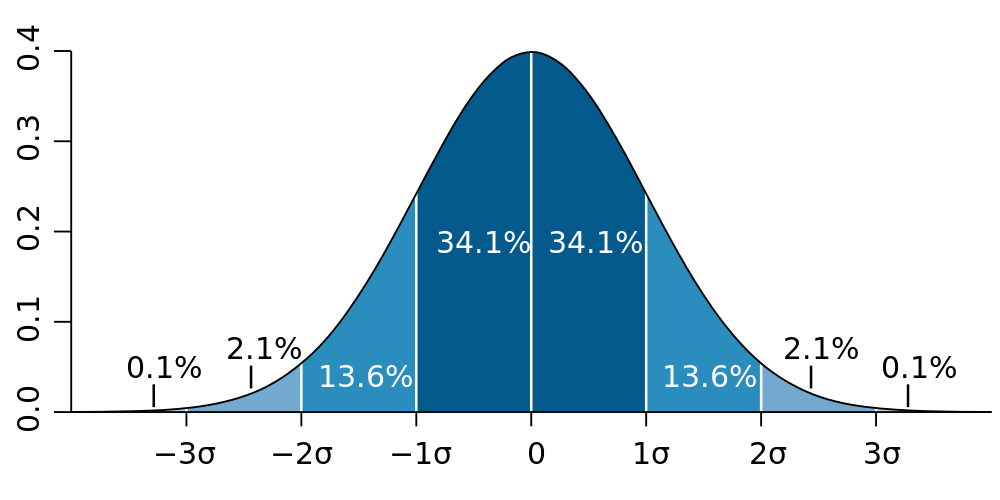 This means that most of the time doing so it’ll pay off (the central portion of the curve). But this also means that there are occasions when you’ll have to bend said rules or even break them (the extreme portions of the curve).

Obviously to bend & break you will have to know first what you’re bending and breaking, i.e. the rules themselves, so this doesn’t means you can happily trow every technical instruction out of the window. Quite the opposite.

It’s like when you learn a new language. At first, you will be most likely incapable of using correctly the vast mass of the idiomatic expressions; they either will not make any sense to you or you will use some convoluted expression to convey the same meaning, uttering phrases that to the ears of a native will sound funny, weird or even incomprehensible.

But then you progress, and you pick up the correct usage for those idiomatic expressions, and suddenly your communication skills grow exponentially. Know when and how to bend and break the rules, when to go against the grain, and your ability to convey what you want to say with your pictures will be vastly improved.

I’m not even sure that we can call these “rules”. Photography is an art form – but not every photographer is an artist, like not every painter is Renoir -, and in an art form you are by definition free to express yourself however you like. The only requisite is that you have to be able to communicate to others what you want to do. Please note that I said “communicate”, not that others have to like your work.

Paradoxically enough, the more innovative you are the more likely it is that people will hate the gut of your work. It happened to Piero Della Francesca, it happened to the Impressionists; if you’re in such an exceptional company WHO CARES of what other people think! On the other hand, be sure to take a reality check from time to time, and that you’re not acting instead like an arrogant a** 🙂

BE AWARE OF ROLLING SHUTTER

Rolling shutter is hideous 99% of the times. But if you understand how it works, it can actually enrich an image, or outright create one from almost nothing. The trick, as always, is to know very well how a thing works, in order to be able to bend to your advantage its characteristics. 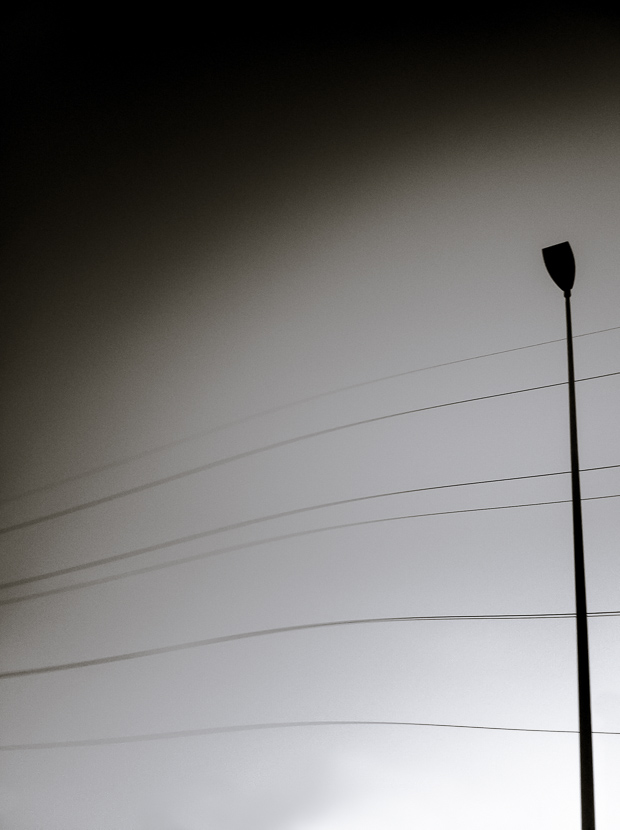 YOUR IMAGES HAVE TO BE SHARP

Pffffffttt…. One of the most beautiful pictures in the history of photography is Man Ray’s portrait of the countess Luisa Casati. It is less known that the same countess had her portrait taken by another photographer, de Meyer, in a more “traditional” style.

Please compare the two images (source: Wikimedia), and then decide which one you prefer. 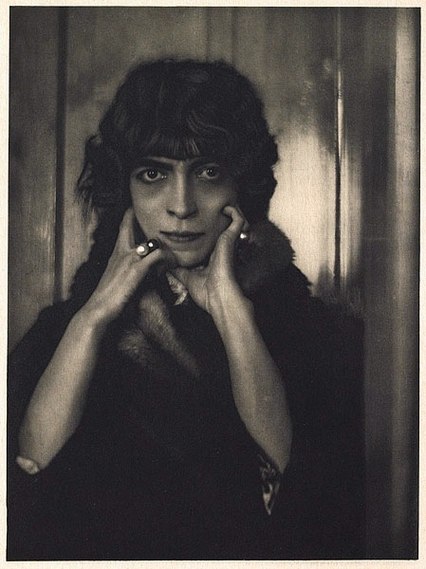 In my opinion, while de Meyer’s portrait is still a nice picture, Man Ray’s one is timeless.

By the way, the picture is motion blurred because Man Ray had to shoot it in a poorly lit hotel room. He at first wanted to discard the image and book another session – or so the story goes – but the countess liked the result so much that this became the chosen shot. 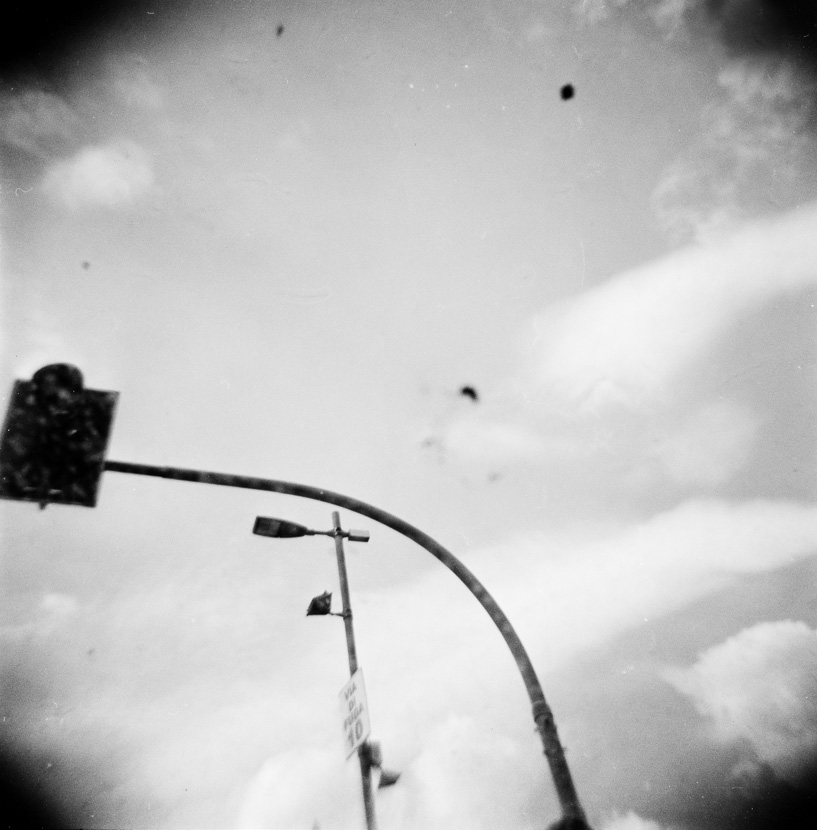 “Escape route 10”. Images shot with an Holga are rarely sharp, but can still be pleasing

The crop police (probably the same people that militate in the grain police, see below) should mind its own business. There are tons of reason for which you might want to crop. The aspect ratio of your camera may not fit your composition; you were shooting something happening very fast, so you chose to compose a bit loose to crop in post; you actually saw the possibility for a different take on the picture only examining it in post, etc. Remember what I said in the prologue about the only prerequisite of photography it being able to communicate. 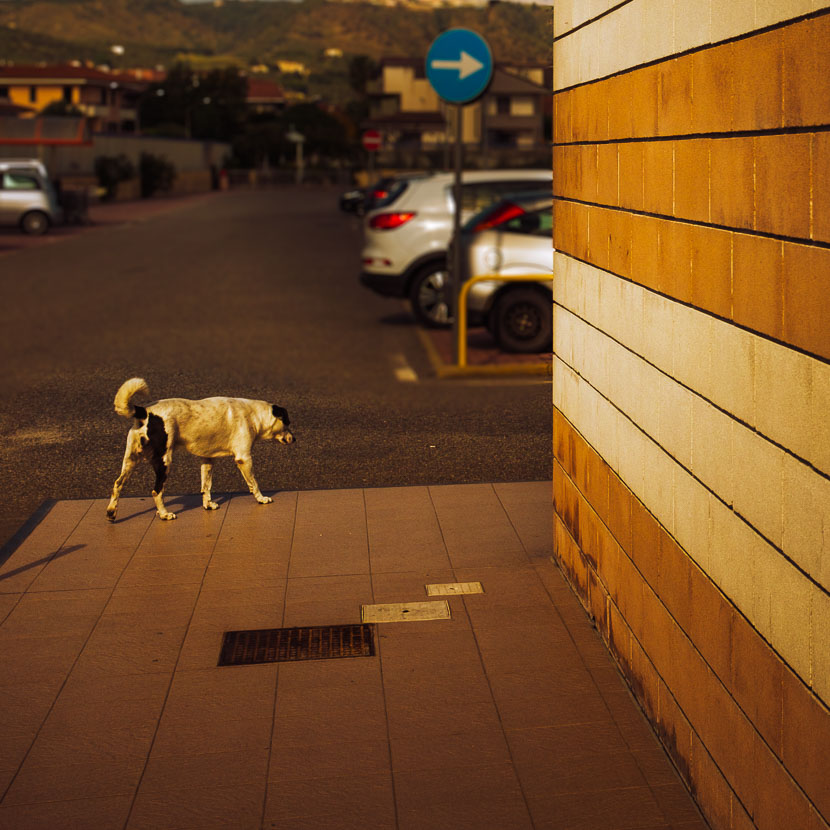 This image begged for a square-ish crop

Who has decided that every image should look as smooth as a baby bottom? Show the grain police that they should mind their own business… 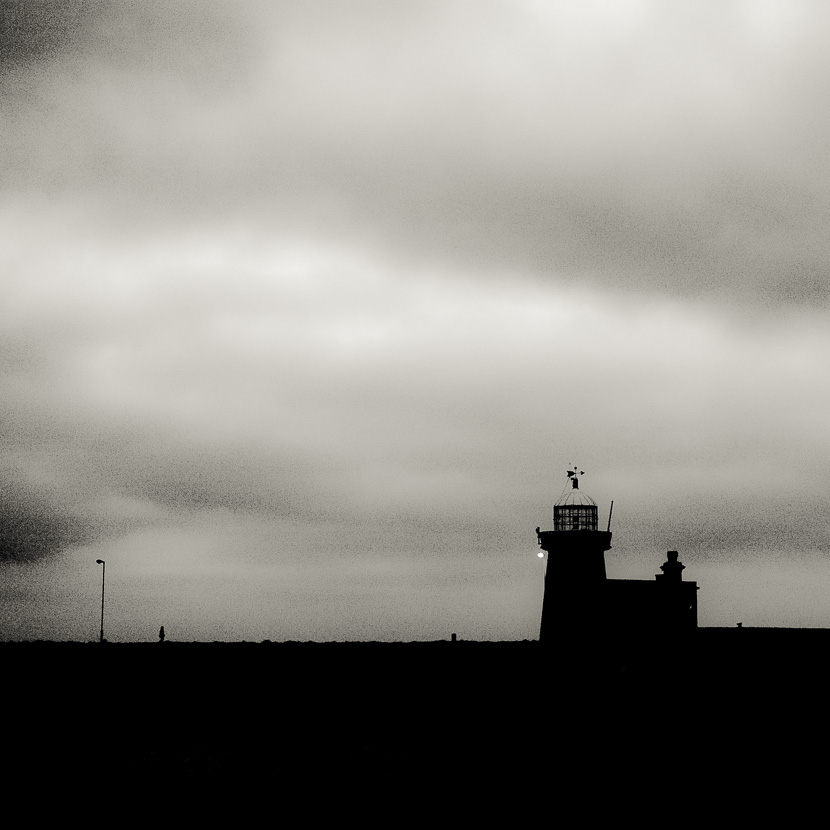 The high ISOs noise in this case complements the fog nicely

This is so “en vogue” that is almost not even a rule anymore, or maybe has become in a weird way a rule on itself (“keep your horizons skewed, do not use a level!”). 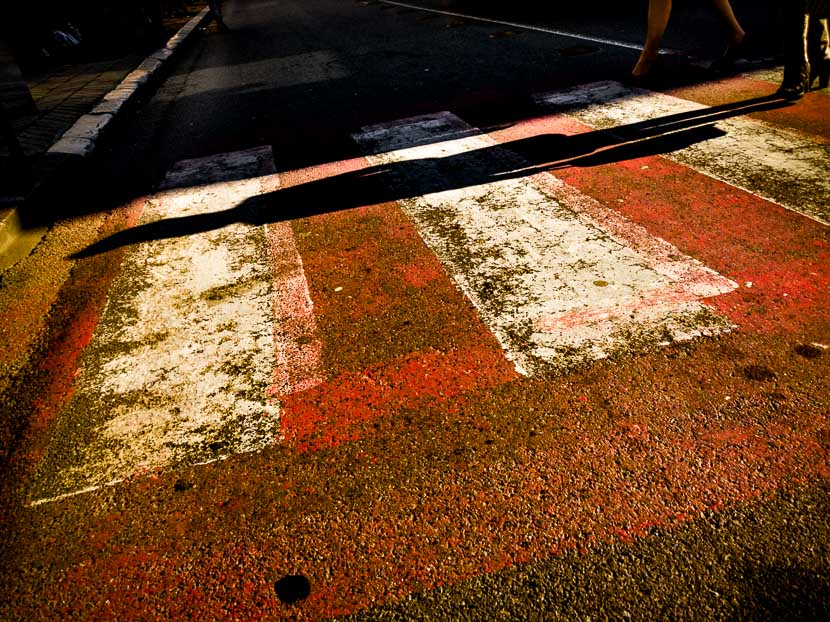 Tipping the horizon makes often for a more dynamic image

DON’T SHOOT FROM THE HIP

The enforcers of this “rule” are forgetting that some of the best work – historically – in street photography has been shot either this way or even resorting to hidden cameras. Especially now that everyone is immediately aware when a camera is around him/her shooting from the hip can be the only way to actually capture some spontaneous results. Besides, if you are more interested in showing the lower half of your subjects the results are more pleasing and less distorted this way – or using a tiltable LCD screen – than shooting at eye level. 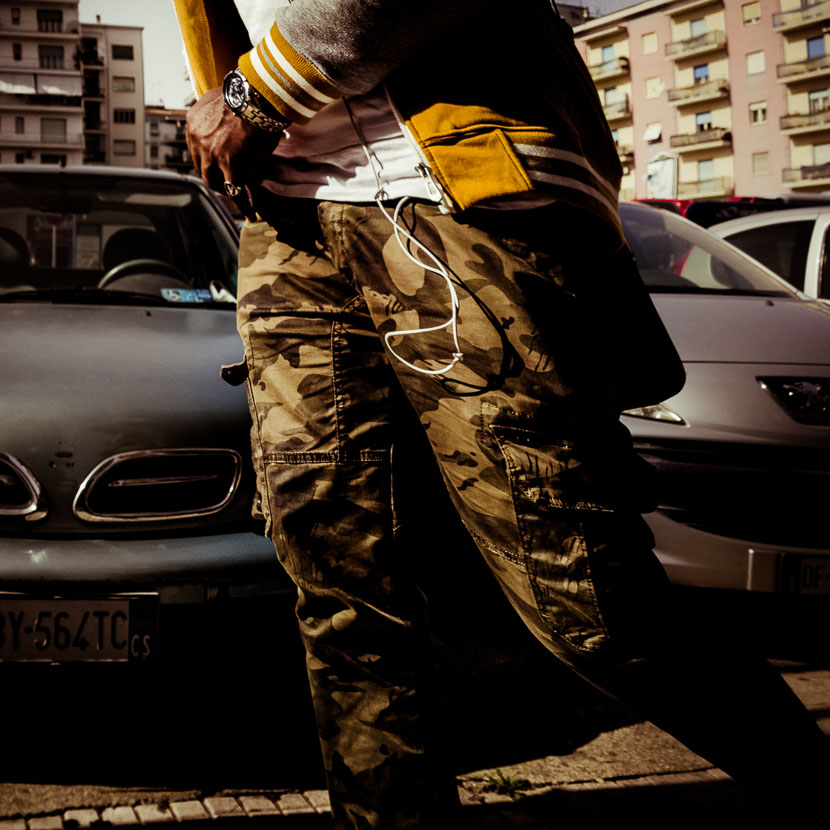 The interesting detail was the kind of trousers he was wearing, so shooting from the hip avoided distortions

In my opinion, and contrarily to many other rules discussed here, this is not even a real rule but utter b******t. If you’re not convinced, do yourself a favor: collect in a folder a few dozens of images you love – not just “like” -, preferably of masters of photography. Now try to see how many of them actually conform to this supposed rule.

I keep a permanent collection like this in Photo, of pictures that I fell in love with, and I check them from time to time for inspiration and my own education (nothing better than to look at great images to educate yourself). Almost none of them, and I’m up to several hundreds, follows the rule of thirds. 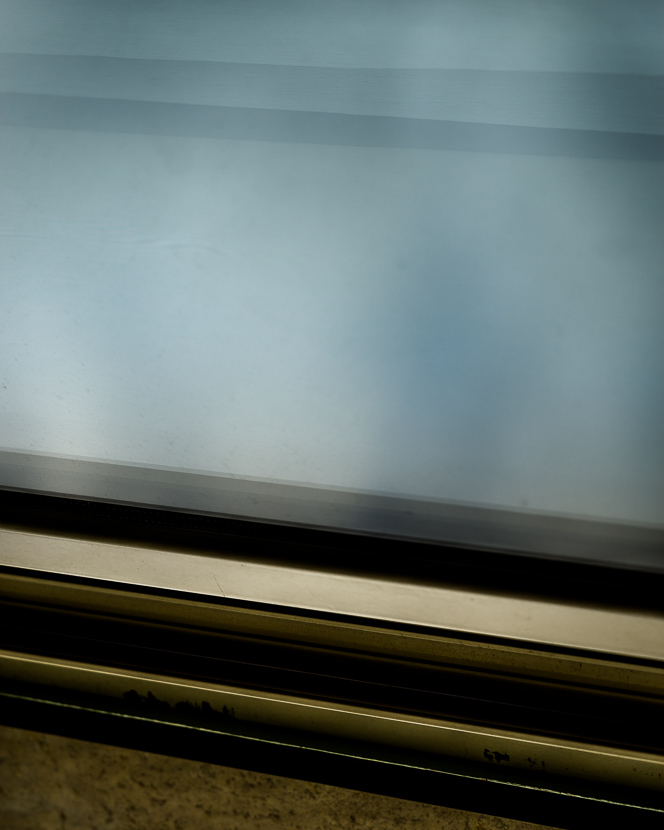 DON’T SHOOT AGAINST THE LIGHT

This is a safe rule of old that used to be printed inside every package of Kodak 35mm roll-film. It has been repeated often enough that still many people follow it. But there is nothing esoteric – especially with the ease of checking the results immediately proper of the digital workflow – or wrong in shooting in backlit situations, and the light more often than not is beautiful. 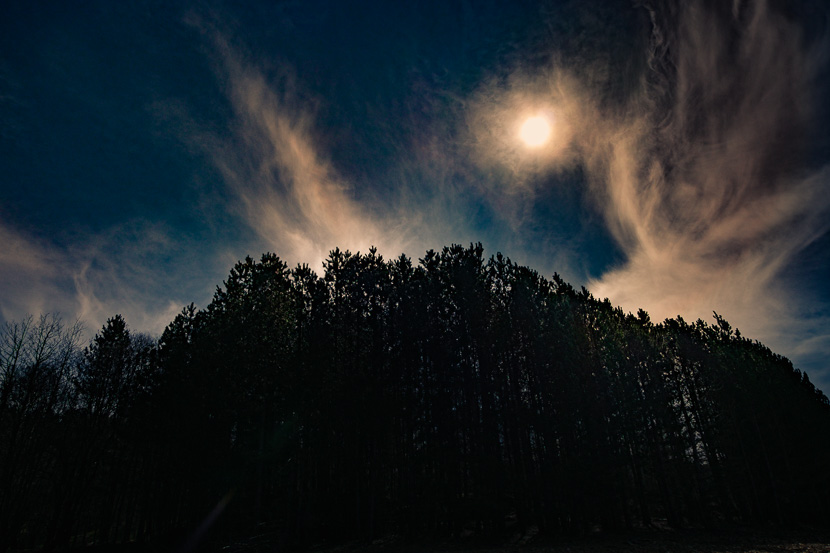 Not as difficult as it may look, even on film; on digital quite easy actually thanks to the ability to check your histogram

YOU SHOULD BE ABLE TO SEE DETAILS IN THE SHADOWS

One word: why? For thousands of years painters used plugged shadows to direct the viewer attention; why shouldn’t we do the same, at least if so pleases us? 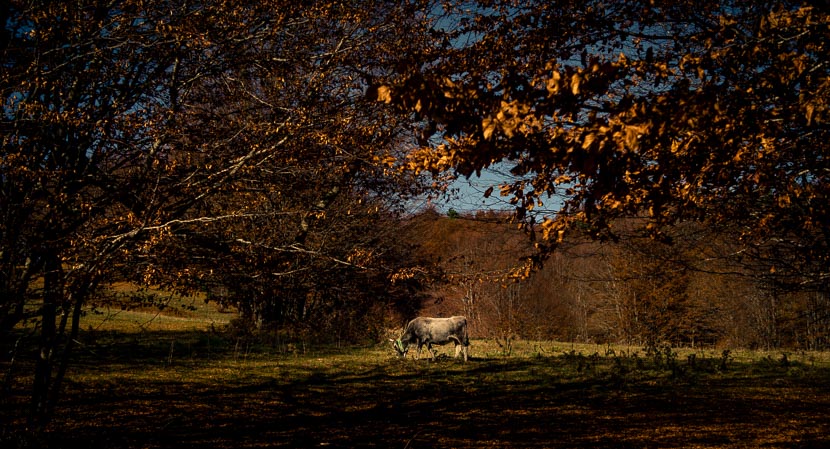 Details in the shadows would not add a thing to this image, on the contrary they would distract the attention of the viewer.
Also a good example of the “Do not crop” rule: this image called for a more panoramic composition than the usual 3:2.
And no rule of thirds…

While on film you can get away more with this, thanks to its better highlight roll-off, with digital 99% of the time is true that you should avoid blowing the highlights.

Second of all, like with many other “mistakes” you may happily blow the highlights if it is clear that you did it intentionally, for a stylistic choice. For example: a few blown off highlights in a background will most likely look like a mistake; an entire background (or a significant portion) overexposed to white will look instead like a conscious choice. 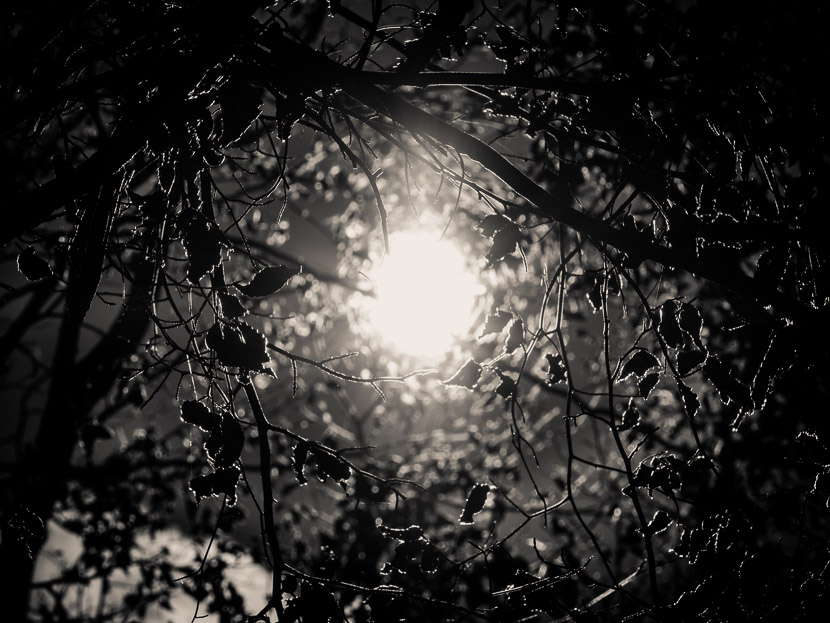 You won’t be able to see detail in the sun, no matter how much you underexpose, and it would look unnatural anyway

Hopefully you get the gist. We are not lawyers or engineers. We don’t have hard rules to follow. The only criterions are:

Should these two points be satisfied – and keep in mind who your audience is, because it is often impossible to be able to communicate your vision to everyone -, then your work is done. Don’t mind the rules, mind only the results.