If you shoot film and you don’t are much into chemicals, or don’t have a basement in which to keep a gigantic 5×7″ enlarger, you’ll soon end up with the need of a way to import those beautiful pictures you’ve taken on the computer. What? Why I didn’t say straight on “you will need a scanner”? After all it’s not 1987 anymore, and scanners are common like toaster ovens.

Well, I didn’t say “a scanner” because this it’s not the only way you can digitalize those pictures. Indeed, turned out, even though it’s the first, and often, only way most people will think of, it is the most inefficient and time consuming. And it can loose a lot, i mean A LOT, of the quality of the original slide or negative.

But now there is a much better alternative…

Let’s cut to the chase: I’m proposing here to use a digital camera of high pixel count – full format / dx format doesn’t really matter – mated with a good macro lens to scan the film using multiple shots, like in a panorama. “A good macro lens” that it’s like saying “a macro lens” because, with the possible exception of some russian misassembled lemon, they all range from really good to exceptionally good. And if you have a bellows you can use, instead, an enlarger lens (an Apo-Ronar, for example, will put you back of only 60 / 70 euros).

But what about the quality you say? That it’s what this post is for!

First a brief overview of the contenders:

The film-holder height has been calibrated. I did not use fluid mounting, but I taped the films to the film-holder and / or used a glass to keep the films flat; so fluid mounting should only make a difference in terms of absence of dust, appearance of the grain clumps and, possibly, slight better tonality

The films has been professionally scanned by an external service

Given that the Canon 5D Mark II it’s the challenger we will compare it separately against each of the opponents.

So let’s check first how this setup fares compared to the Epson V700, an excellent flatbed per se (still a flatbed though).

Those are all 100% crops. First the “usual difference” between the output of the two systems: those crops belongs to a 4,5x6cm negative shot with an ultra-sharp Fuji GS 645, on a sturdy tripod and with a soft release. The Epson crop has been sharpened, the Canon one NOT (no kidding). 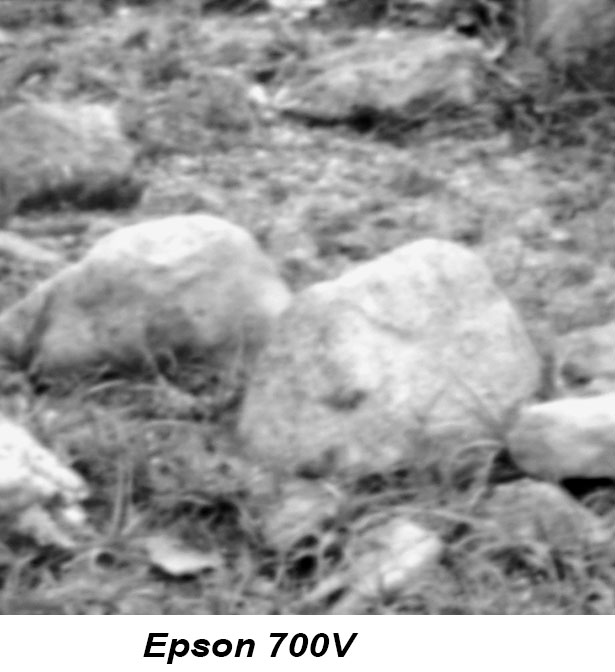 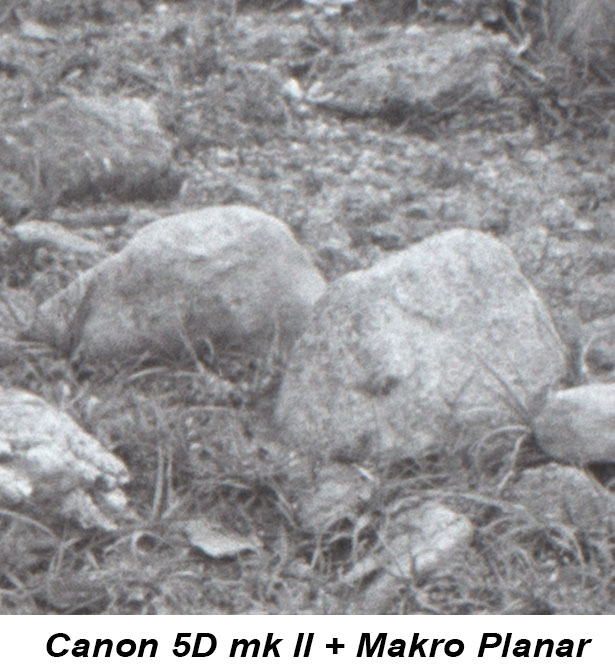 Yes, the Epson (or any other flatbed scanner, for that matter) here looks like an old man who is in desperate need of new glasses…

And now the best possible case (I saw the Epson behave so well only in rare occasions, like once or twice in a blue moon). Those crops have been shot on an Hasselblad 500c/m with mirror up, the standard 80mm f/2,8 Planar, tripod etc. 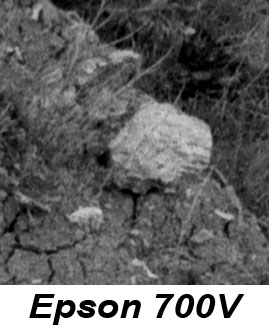 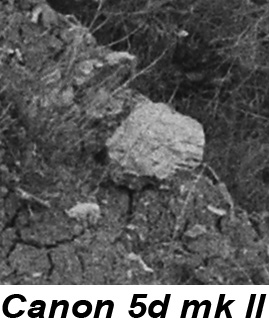 Yep, you just witnessed the death of flatbed scanners as film-scanners. So buy the cheapest all-in-one or LIDE model you can get, just for bills and invoices, and be done.

But surely a drum scanner, a thing that costs more than many cars, whose scansions cost you 60 / 200 euros a pop, will put the Canon setup to shame. Let’s see. Those were shot on a Linhof Technika 13x18cm with a Symmar-S 240mm f/5,6. The drum image has been sharpened by the photo service, the Canon one is unsharpened: 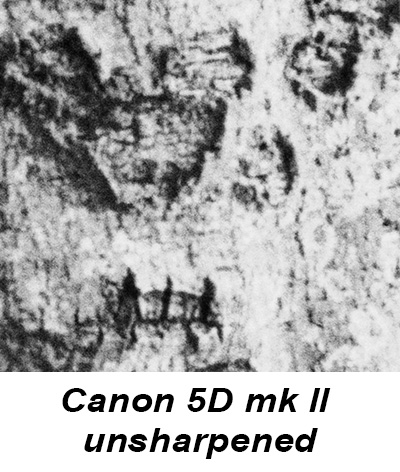 No, I’ve not made a mistake. Actually, I made one when I loaded the files in Photoshop. I gave both the same name – putting them in different folders – to make a sort of “blind test”. Well, I saw immediately that there was no contest, even though I made all the tests anyway. Boy oh boy I was up for a surprise…

This surprise came when I was saving the files: I used “Save as…” because I wanted to change back their names to something meaningful, and then I discovered that the file I was absolutely sure was of the Dainippon drum scanner, because obviously superior, was in fact the one shot with the Canon! I even double checked the exif, because I cannot believe my eyes.

The amazing thing is that I did NOT used the lens at 1:1 or, like I do on 35mm film, at 2:1 or 3:1 magnification. So, in exceptional cases of extremely sharp negatives – say ultra sharp lenses and microfilm like films – I would be able to pull out even higher resolution!

And, just to clear any doubt you may have, here the two crops above after a good dose of sharpening: 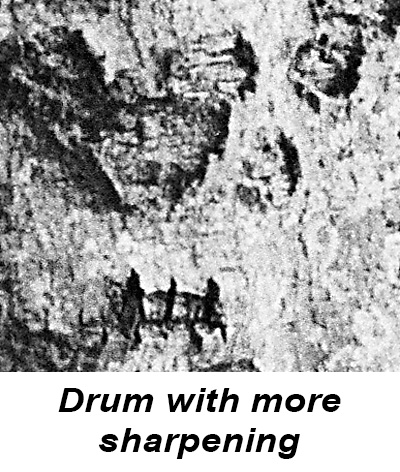 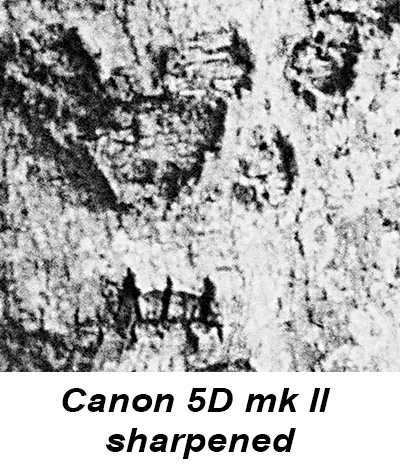 Like I said going up with the reproduction ratio you can extract even more detail. See for yourself. All the following 100% unsharpened crops came from a 6x6cm negative shot like the ones before with an Hasselblad 500c/m with mirror up, the standard 80mm f/2,8 Planar, tripod. The last crop has been resized at the 50% (at 3:1 there is more grain than detail, so keeping a gigantic file is pointless). And please ignore the tonality; this is a shot from a color negative, and I’m struggling a bit to find a suitable curve: 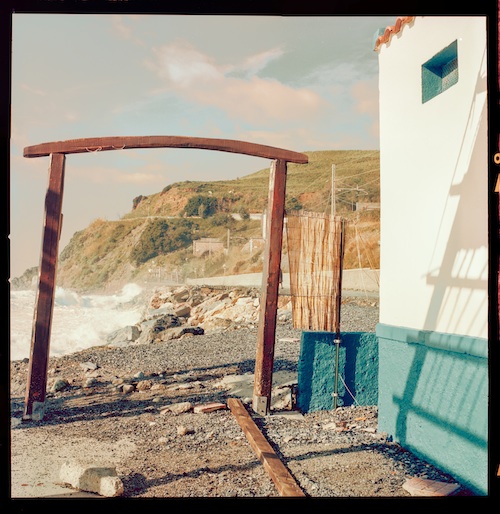 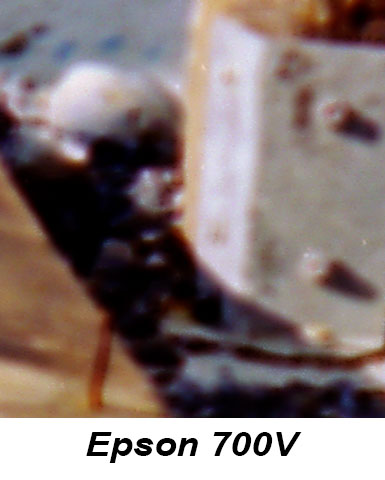 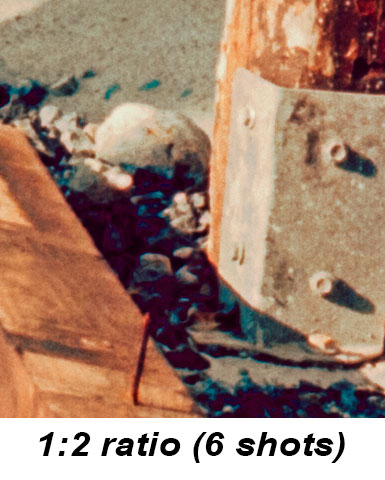 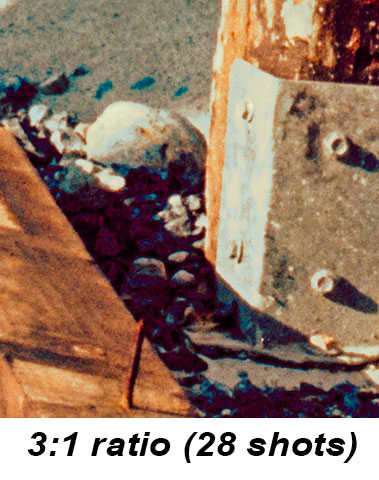 I showed here only few examples, but I tested this thoroughly with many images, colors and black and white, slides and negatives, and I consistently found the same results.

Even the tonalities of the films were much better preserved with the Canon than with the scanners. And, as an added bonus, including the picture borders or importing into the computer some odd format shots – 6×17, for example – it’s a breeze.

Summing up: forget about scanners. Yes, if you have 3.000 euros laying around and you need to scan 100 shots a week by all means buy a Coolscan or an Imacon – but in this case for the sake of your own sanity go digital and lose film! Instead, if you need just to scan your best shots follow my advice and use this system.

Stay tuned: in the next post we will get in the specific of how to get the job done.