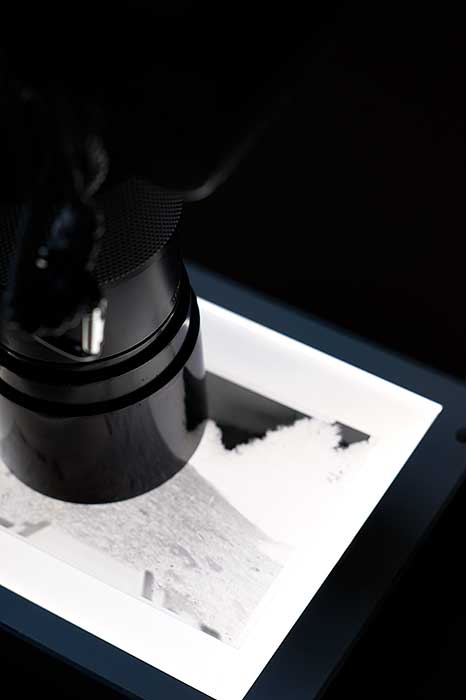 If you’ve not read this previous post so far give it a skim:

You will see what level of (very high) quality you can expect using a digital camera as a scanner, as long as you setup everything nice and properly aligned – don’t worry, it’s really simple!

The nice thing about this technique is that you will be able to extract all the information on the film even with a low-res digital camera, as long as you can increase the reproduction ratio and get used to join multiple files in one, like when doing a panoramic image. For the details please take a look at the previous post linked above.

The setup, like I said, is really really simple: you will have to put you camera vertically on top of the film – taped on a slide viewer – using a metal lens hood that act as spacer / camera support / light screen. Then you’ll use the Live View to focus on the film grain, and the self timer set at 2 seconds or a soft shutter release to avoid vibrations. 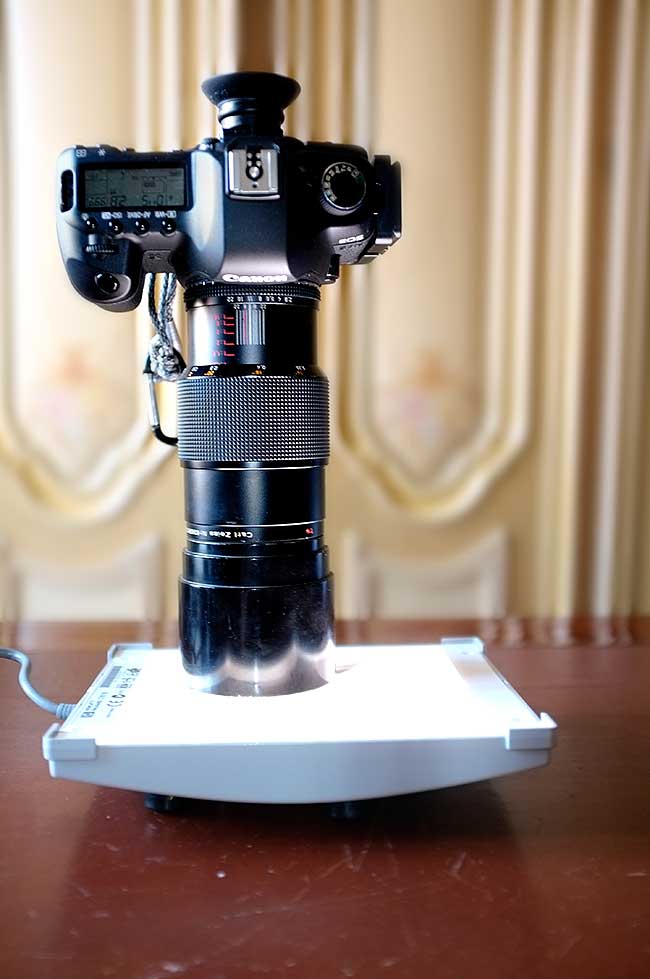 Like I said the secret is taking multiple shots of each film frame, and joining them in a panoramic software.

How many shots will depend of:

> the reproduction ratio you (and your lens) will use

> how much detailed the picture is

> the resolution of your camera

> the sensor size of your camera (full frame, aps-c)

Generally I use a 1:2 enlargement ratio on medium and large format film and a 3:1 ratio on 35mm and I get more or less this results:

How to take the multiple shots… 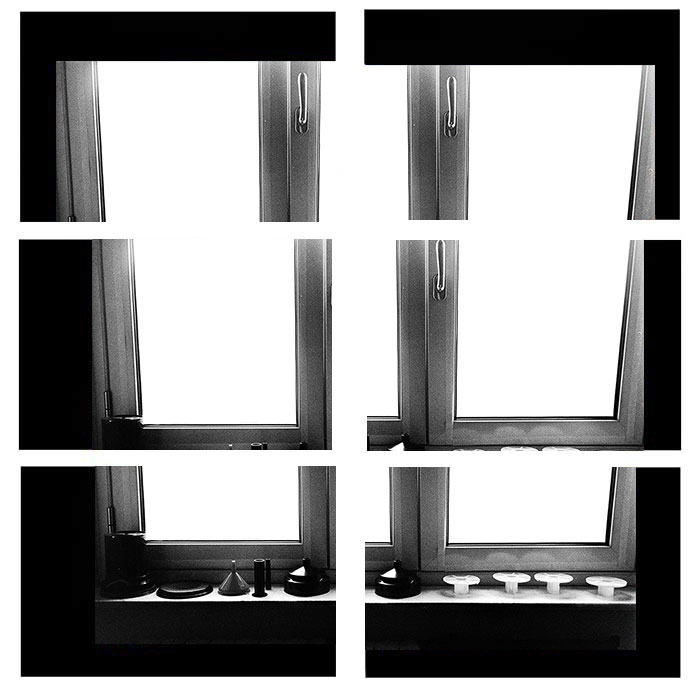 …and the resulting image 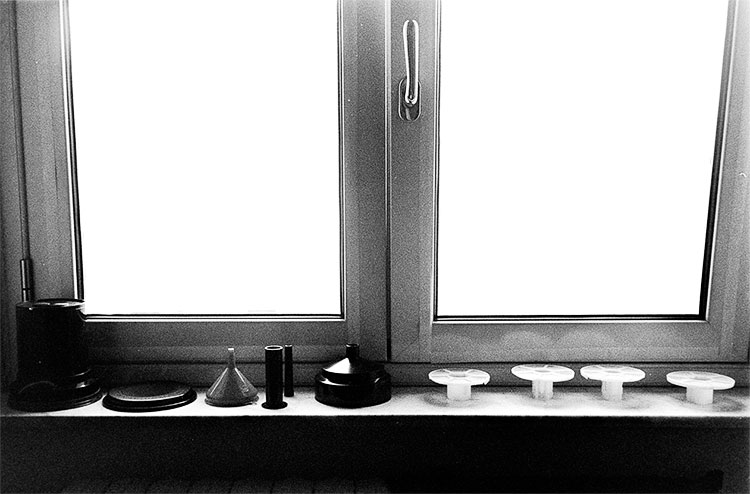 The shooting session lasts generally 15-30 seconds for each complete picture; how much time the computer will need to join the shots will depends by the computer processor power and amount of ram, other that by the number of shots to be joined. But for you to have a rough estimation: my 2011 iMac, with 24Gb of ram, generally takes 30-50 seconds to join 6 shots and up to 10 minutes to join 30 shots.

Using an higher reproduction ratio is more time consuming (you’ll need more shots to cover the same area), but as a result you will be able to get the most detail from the film. Just check this few examples, in which the Canon setup is used at various reproduction ratios and compared against a well respected flatbed scanner, the Epson v700: 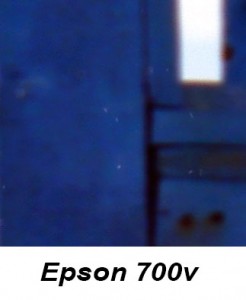 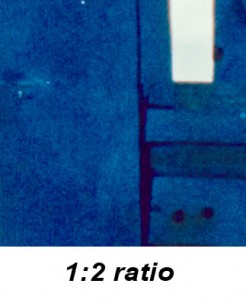 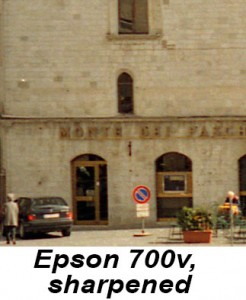 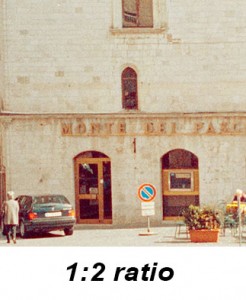 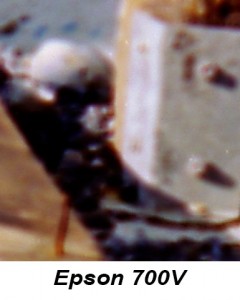 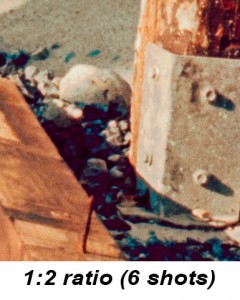 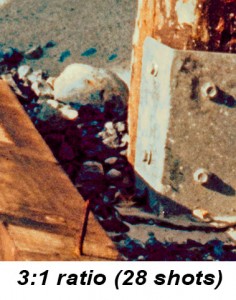 This is all for the general guide, now some tips:

– don’t try to focus at full aperture; even an excellent lens like the Zeiss Makro Planar has its problems, and all your pictures will look like mush. Close the lens a couple of stops from the maximum aperture to focus (remember, set the Live View to compensate automatically for the light loss if you want to see anything at all!)

– if possible focus on the film grain, not on the details; this way you will be sure to extract all the information there is on film, and it is easier; if you don’t seem able to see the grain just look at a dark out of focus area, the grain will pop out!

– focus independently each frame; even if they are on the same strip of film they will require more often than not an adjustment in focus

– for maximum sharpness tape the film to the viewer, tensioning the film itself a bit to ensure maximum flatness; use painter’s paper masking tape, the one that leaves no residues

– if your computer is powerful enough shoot in raw; you will benefit not only from more detail, but also from extended dynamic range and better gray / colors

– close the lens a couple more stops from the one you used to focus – till f/8 or better f/11 – to take the shot. This way you will hit the best spot of your lens and avoid vignetting related issues

– take a custom white balance on the viewer surface, without the film. This way the colors will be almost perfect without the need to mess with the curves later in Photoshop or Gimp

– shot in manual mode, to have the same exposure and density on all sections

– “expose to the right”, i.e. overexpose until the histogram for all the colors almost touches the right side of its window; this will ensure that you will have less noise as possible and that you will exploit the entire dynamic range your camera is capable of. Be careful to not overexpose too much – another good motive to shoot in raw

– shot in some kind of order (clockwise, counterclockwise, whatever), to avoid forget same part of the film frame; after a while it will became routine, and you will become very fast

– to avoid scratching the negatives put them down with the shiny side up – it’s called “protective layer” for a reason; having the opaque side – the emulsion – in contact with the viewer surface will avoid the formation of Newton rings too

– if the picture you’re about to “scan” has got few details – vast areas of sky, water or out-of-focus zones – take closer knit shots to help the panoramic software identifying some meaningful “anchors” to use in the merge

– if you don’t have a slide viewer, but you’re comfortable around electricity, you can easily adapt to the same use an old scanner transparency adapter or build one of your own (plenty of DIY projects like this on the web)

What panoramic software you want to use is your choice, there are hundred of them out there. The only important thing is that it has to let you join the files in a “matrix” fashion, not only in rows. Here some of the one I tried or use, and a few notes for each one:

– Adobe Photoshop function Photomerge: really good 90% of the times. Use the “reposition” option, because you are not shooting a panorama, so there is no parallax error to take care of. Its biggest downside is the lack of the possibility of manual corrections; on the bright side it is still one of the fastest panoramic software I ever used, and it was able to “digest” without a hitch even 110 files at once.

– ArcSoft Panorama Maker 5: really good for those 10% of the times in which Photomerge goes nuts. Its biggest drawback is the impossibility to maintain the 16 bit in the output tif. Quite cheap (13,99€ on the Mac App Store).

– Kolor Autopano Pro 3: as good as PhotoShop CS6 or slightly better. A lot slower, though. On the other hand it can batch process entire folders of files recognizing automatically which files to merge in which panorama. Not so costly, just 99€.

– PhotoStitch: this one comes free with every Canon digital camera. It would be really good, except that has a strong tendency to crash if used with 6 files or more (at least with Canon 5D mark II files, could also be some kind of incompatibility, I don’t know). Same problem of Panorama Maker, meaning that it doesn’t support a 16 bit output. Better, it supports 16 bit on paper, but the resulting tif files will be an ugly mess.

– Hugin: free and extremely complete. For the same reason a bit complex and intimidating at first, even if it’s present a sort of “assistant” that it’s supposed to guide you. Excellent for general panoramic photography, I found it a bit of an overkill for just join a few shots like in the technique discussed here.