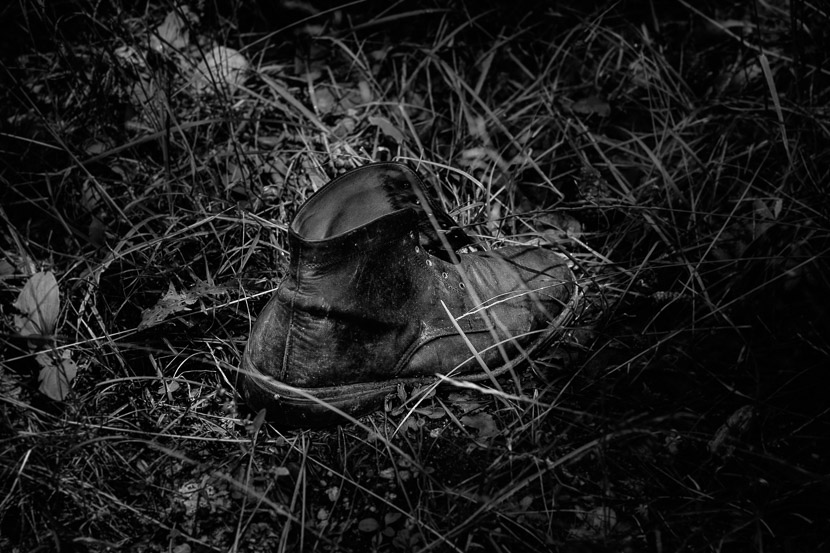 I’m getting great results, especially in terms of colors, from the little Fujifilm. The files look impressively sharp, and are easier to process, at least for me, than the ones from the A7r.


At this point I’m seriously thinking to get rid of the Sony, because shooting the Fuji fits more my style and is more enjoyable in general. Yes, with the Sony you can go on and on, but when it was the last time that you printed something more than 150cm across? However, not having shot the same scenes with both cameras at the same time I wanted to be sure I wasn’t “seeing things”.

So I decided to put them one against the other taking identical shots few seconds apart. You can see below the results, shown as a set of unedited (barring white balance and sharpening) twin crops. 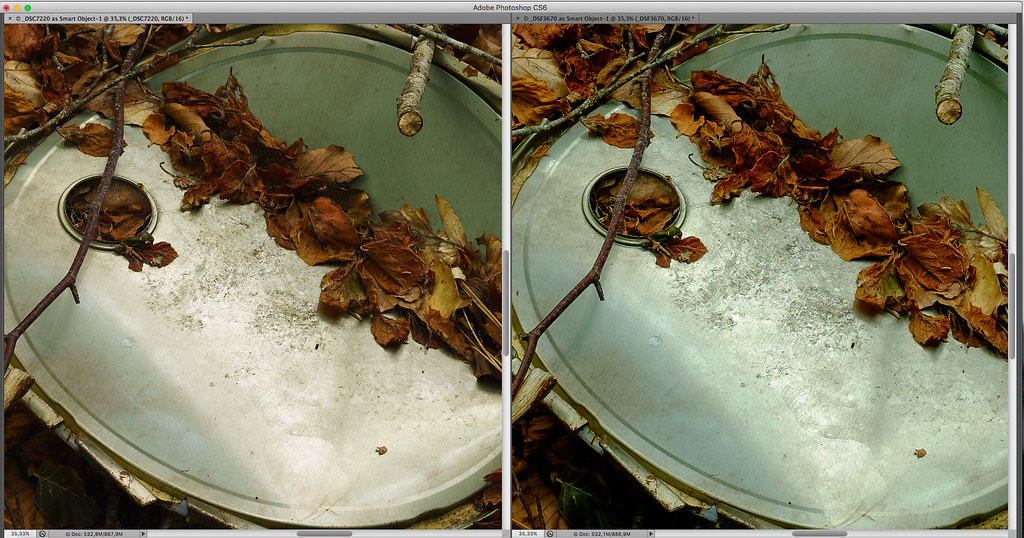 Click on them to see the images properly on Flickr, albeit a bit softened by the web compression. They are circa 2 / 2.5Mb each. Keep in mind that these crops on a normal, non-retina, screen will have the same dimensions of a print of a 100cm length.

In each, one of the images has been shot with a Sony A7r (“Landscape” picture style), the other with the X-T10 (“Velvia” film simulation), trying to match the colors to a reasonable approximation. Both using Contax Zeiss glass at the same aperture (yeah, I know, shooting the APS-c X-T10 one stop wider would have been more fair to the Fuji because on a smaller sensor diffraction sets in first): a 50/1.7 Planar on the Sony, a 35/2.8 Distagon on the Fuji. I know these lenses well, and from f/5.6 onward they are undistinguishable so any difference is due the sensor, not the lens. Besides, taking the crops I’ve avoided corners and sides, i.e. regions where the lenses might perform less than ideally. 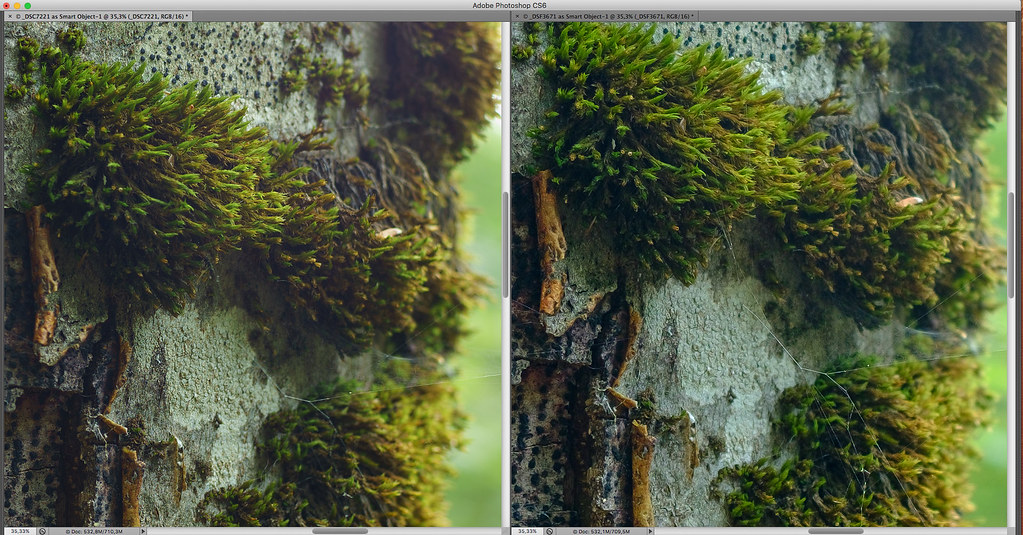 Irident (or RawTherapee using at the same time “Deconvolution” and “Microcontast” sharpening) would be able to squeeze even more details from the X-T10, but for these examples I’ve used Photoshop CS 6.

My final opinion? Well, color me impressed, to say the least.

Remembering that you will watch a print this big at least from 60/80cm apart, so please don’t put your nose on the screen 😀 , can you tell which one is which*? Hint: I’m pretty sure my A7r is hitting eBay soon!

*the answer is at the bottom of this post

Sharpening is what makes or breaks the Fuji files, much more so than the ones coming out from a Bayer sensor.

Keep in mind that the following values are indicative (you’ll have to tweak them based on the picture content and the amount of detail) and based on fairly big prints, like 60x90cm and up. However, given that to properly apply them you will have to use your picture as a “Smart object”, they might work even for smaller print sizes, especially toning down the radiuses. 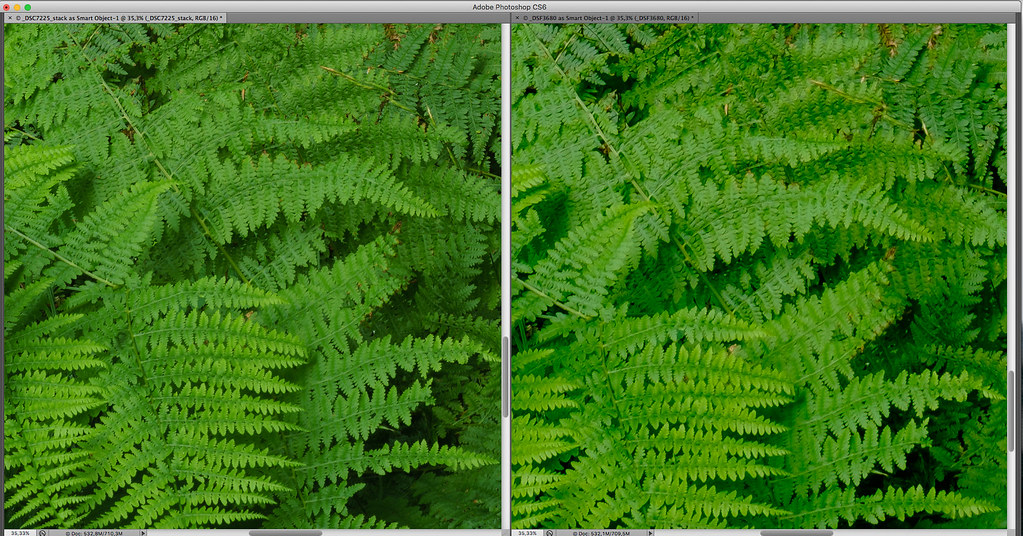 In Lightroom or in Camera Raw (same thing) I gave the files a fairly conservative (for an X-trans sensor) capture sharpening: amount 40 / radius 1 / details 60 / masking 10.

Then I opened each file in Photoshop as a “Smart object” and I resized it to fit my desired print dimensions. 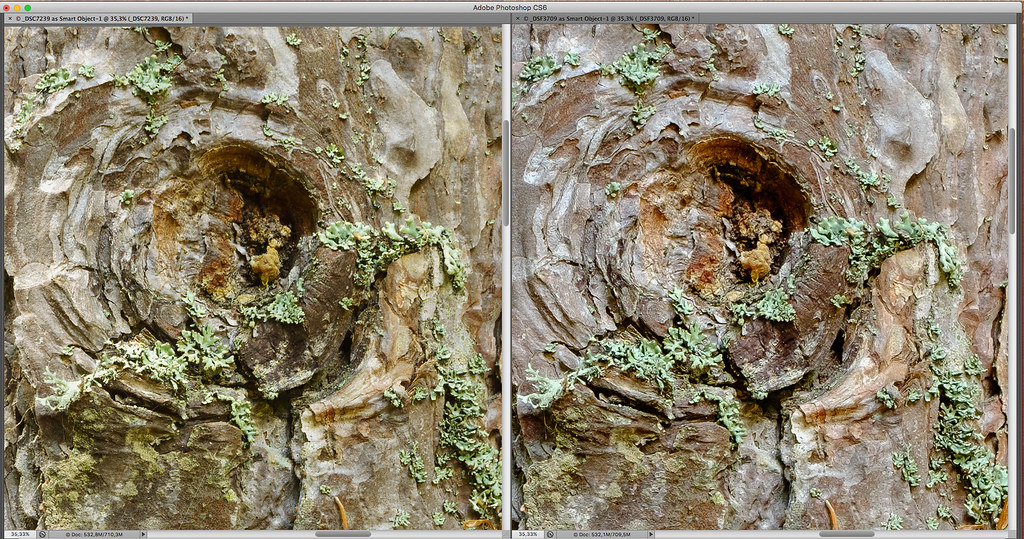 OPTIONAL STEP (not used in the samples above): at this point, should you want results more comparable to Irident, but at the cost of a tad more noise, you should add another round of “Smart sharpen”: amount 40, radius 1. Irident will still be able to pull off a bit more detail, though.

After these steps all that’s left is print sharpening (not applied here, given we’re looking at the pictures on a screen), but of that I usually let the now free Nik Sharpen plugin take care of. 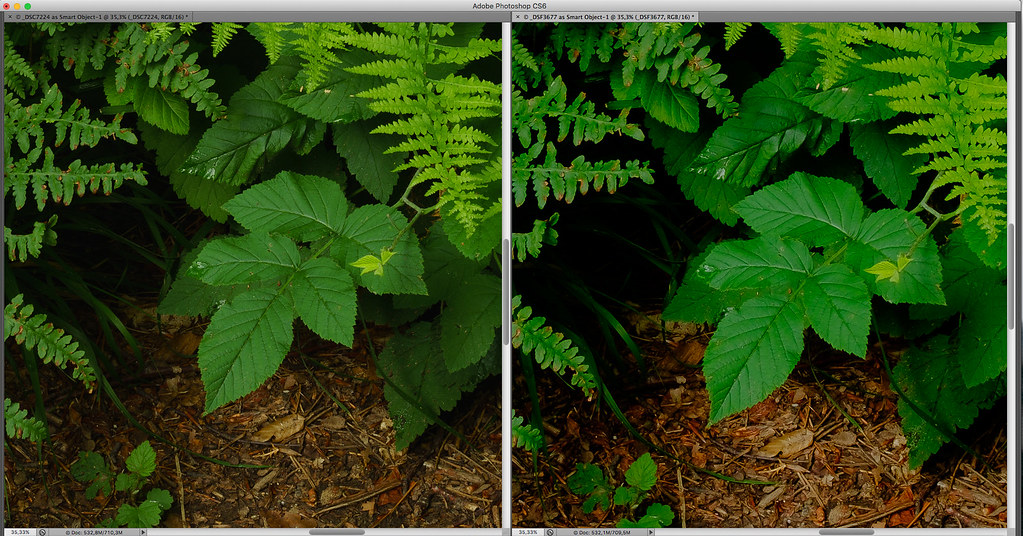 What I’m showing here are the areas that came out sharp on both cameras. In some cases you can half-see a small advantage for the Sony in some areas of very fine detail, but:

And below you can see how much more depth of field you can gain with the Fuji, while with the Sony A7r even stopping down to f/16 or f/22 with an 18mm lens often won’t do, and you’ll have to resort to focus stacking. Besides the added workload, that means the concrete possibility of loosing the shot, because focus stacking is in my experience quite troublesome with natural “moving” subjects (think: wind, dappled light etc.), and more prone to user or software errors than, say, HDR. 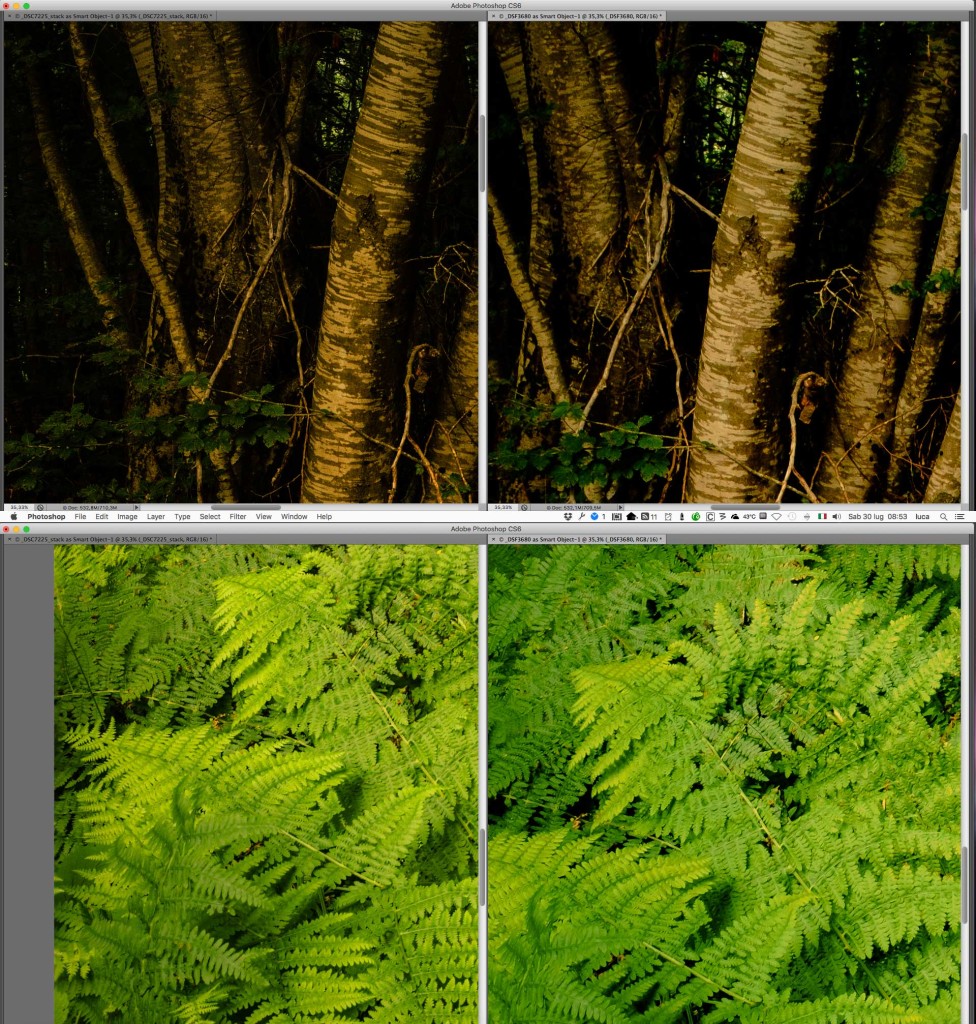 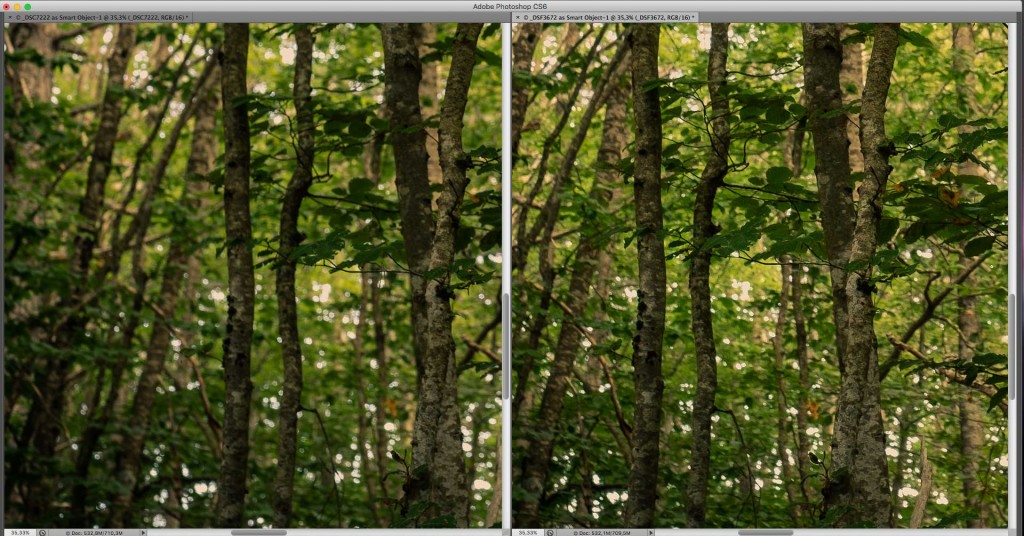 Speaking of HDR, with the Fuji is really really difficult to blow out the highlights, something that I did not expect. So HDR is not really needed on a technical level, unless you want to use it as a conscious choice to enrich the colors etc., basically as a creative tool. 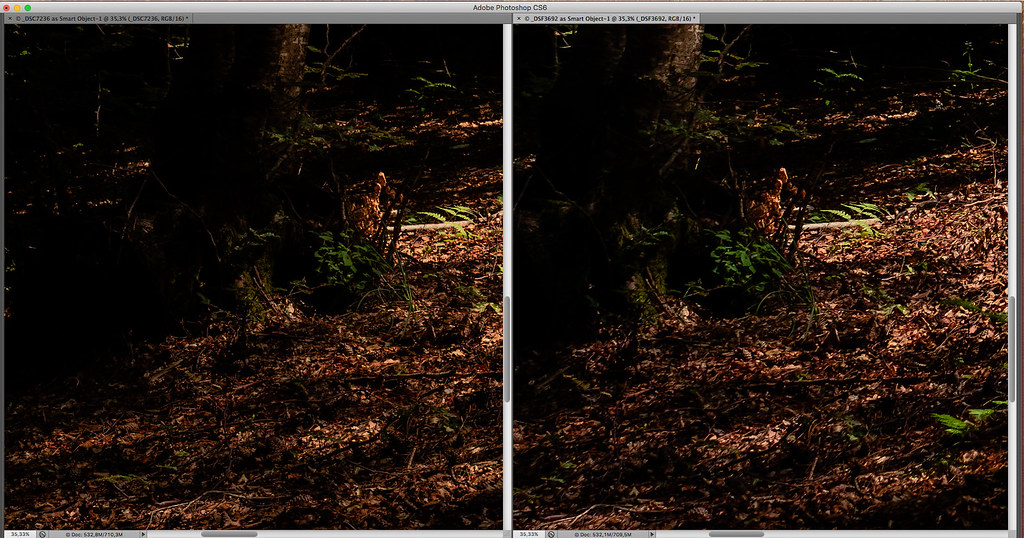 At the same time, the A7r has nicer highlights in the out of focus areas (a.k.a. “bokeh balls”), and that makes for nicer transitions. But that has to do with the absolute (i.e. not equivalent) focal length you use. If you want the same effect in these fairly rare cases with the Fuji you’ll just have to step back a bit (1.5 times…) and use a longer lens instead of the equivalent one. 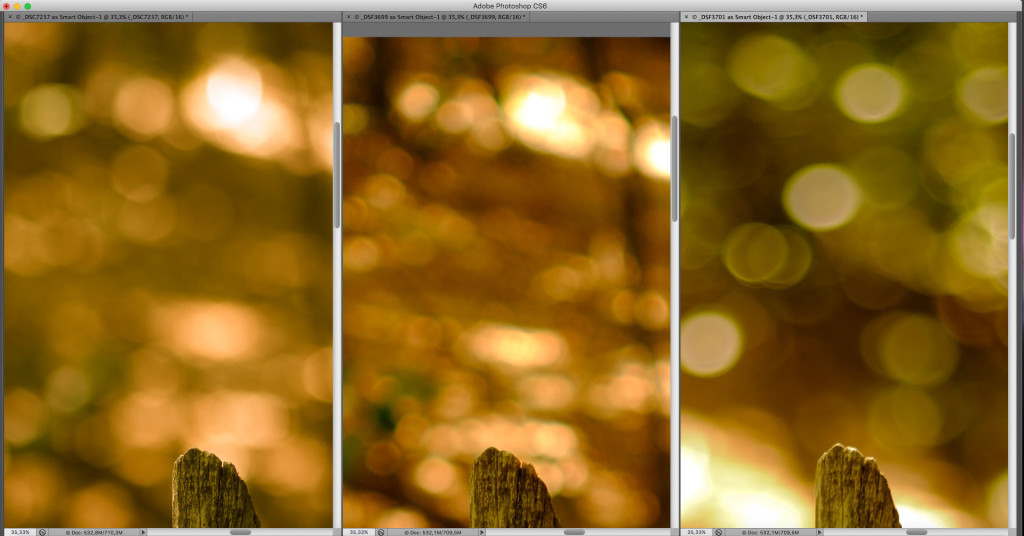 From left to right:
Sony A7r + 50mm Planar @ f/1.7; Fujifilm X-T10 + 35mm Distagon @ f/2.8; Fujifilm X-T10 + 50mm Planar @ f/1.7.
As you can see all it takes to get the same bokeh with the APS-c Fuji is to step back a bit an use the same focal length (i.e. not the equivalent one).
P.s.: please ignore the difference in the colors of the “bokeh balls”, they are due the dappled light in the forest changing faster than I could swap cameras and lenses on the tripod. This means that sunlight hit the brown dead leaves in the understory in the Sony’s picture and the first Fuji’s, and the green leaves on the trees in the Fuji’s last.
And ignore as well the difference in sharpness of the wooden post, given I was testing bokeh I didn’t bother to use the focus magnification with either camera.

Last but not least: when you post-process a landscape shot with a blue sky or blu-ish clouds, the Sony A7r will very rapidly start to put out a ton of noise, even shooting at 50 or 100 Iso. The Fuj stays clean as a whistle. Not a minor point to think about if you’re into landscape photography…